Sometimes drivers take a “that will never happen to me” attitude and rationalize behavior that is considered to be dangerous or unwise.

Distracted driving is now considered to be as dangerous as driving while under the influence of alcohol or drugs. Texting while driving is considered to be one of the most risky things people can do behind the wheel, and most company and government vehicle policies prohibit it while on company time.

Yet, millions of drivers continue to churn out text message after text message on their phones while in control of a moving vehicle, thinking “that will never happen to me.”

Well, it can happen to you, just like it happened to a very close friend of the lovely Jamie Lynn Crandall – Miss Utah USA.

We here at Decision Points were incredibly fortunate to have the opportunity to interview Miss Crandall to hear her moving story about the tragic loss of her best friend in a crash involving texting while driving, and to learn more about her campaign against distracted driving called Hang Up – Save A Life. 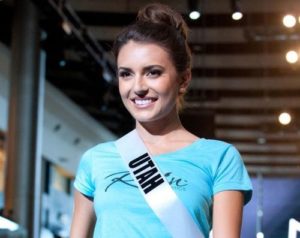 Decision Points: Tell us the story of your motivation behind Hang Up – Save A Life.

Jamie Lynn Crandall: On St. Patrick’s Day in 2007, I was at a party with my really close friend, Lauren Mulkey, and I decided I was ready to go home a bit earlier in the night, around 9 or 10. The next morning, I got a phone call that Lauren was killed in a car accident, and it was because somebody was texting and driving and ran a red light. Two of her friends that were with her were fine, but she unfortunately wasn’t.

DP: So this is a very personal campaign for you.

JLC: Absolutely. Lauren was her parents’ only child, and her mother Linda immediately started a campaign against texting and driving, and she called it Hang Up – Save A Life. I stayed very close with her through the whole campaign; it was only natural for me to help her out. So when I did the Miss USA pageant this past year, it was obvious that it was going to be my campaign as well. I’m so lucky that I can now do it on this big of a scale and get the message out to more people.

DP: On a day-to-day basis then, what do you find yourself doing to help reduce texting and driving?

JLC: We had some billboards made and some bumper stickers as well, so I have a bumper sticker on my car and so do a lot of my friends and family, and it basically says Hang Up – Save A Life with Lauren’s picture on it. But when you have a bumper sticker or another such reminder like that, you’re not going to pick up your phone and start texting while you’re driving. Then I have my Miss Utah USA fan page on Facebook where I’m always putting up stuff about Lauren or about what I’m going next with Hang Up – Save A Life. That’s what I do to keep people aware and share Lauren’s story.

DP: What media outlets or local government agencies are you involved with for spreading the word about Hang Up – Save A Life?

JLC: Here in Salt Lake City, two local news stations have their own campaign called the ‘No-Text’ Zone which they launched a couple months ago, and they asked me to speak at their press conference. Also, right after Lauren passed away, our former mayor Rocky Anderson was starting his own campaign against texting and driving, so I helped out with that and spoke at his press conference as well. So there are lots of different things around town that I help out with.

DP: Do you think distracted driving is also a problem among commercial fleets?

JLC: I think everybody is guilty of it. Although I’m trying more to get the attention of young people in high school that are just starting to learn how to drive, it’s just as important for people my age and even our parents, because they’re just starting to learn how to text, and they’re trying to do it at the same time they’re trying to do everything else. I would especially hope, however, that the drivers of fleet vehicles would take these warnings even more seriously, as they’re on the clock at their job.

DP: I understand you’re involved a lot with your church as well talking about Hang Up – Save A Life. Are you then trying as much to reach out to the chaperones that drive the church vans as much as the kids in the youth group?

JLC: For sure! Everyone can relate to my story, because those parents could have a child that’s 17, like Lauren was. So I make sure everyone hears it and not just young kids.

JLC: I haven’t told many people this story, but about a year ago, I was getting on the freeway, waiting to merge into traffic, and I got rear-ended. We were both okay, and nothing really happened to my car, but when we pulled over to the side of the freeway, the girl driving the other car said “I feel so bad, I’m so sorry. I was texting and I didn’t even notice.” When she said that, my heart just dropped. She was very apologetic that she had hit me, so I didn’t tell her my story because she already felt so terrible. But I have had my own first-hand experience with the dangers of texting and driving, although I wish Lauren’s experience would have been more like mine.

DP: So you REALLY have a personal issue with texting and driving!

DP: There’s a lot of new technology coming out to let people have the best of both worlds: to be able to stay connected while still driving safely. Cars with built-in Bluetooth systems, voice recognition, and smartphones that have speech-to-text capabilities are all giving you the ability to still use your phone while keeping your hands on the wheel. Do you think any of this new technology may actually reduce the risk of distracted driving?

JLC: I think they are coming out with this new technology for the right reasons, so people aren’t actually holding the phone in their hands trying to text and drive at the same time. But when you’re engaged in a conversation, your mind really isn’t on the road. So I think it only solves part of the problem.

DP: Now that we’re so connected to each other through Facebook and Twitter, and feel like we’re under so many social obligations all the time, it is difficult to find a middle ground, isn’t it?

JLC: It is, because when I was 16, we didn’t have all these things you’re expected to do all the time. You also have to learn how to use GPS nowadays too, and it is very difficult to be doing all of these things in your car when, really, you should just be driving.

JLC: However, I always say that if you get a text message or a phone call that really is that important… to just pull over. Nothing is so important that you have to jeopardize your or someone else’s life, and I’m sure Lauren would agree with me if she were still here.

DP: Where can we find out more about Lauren and about Hang Up – Save A Life?

JLC: The website is www.hangupsavealife.com, which has a lot of pictures of Lauren and her full story, and I also post a lot of good information about the dangers of distracted driving on my Facebook fan page which is www.facebook.com/missutahusa and my Twitter which is www.twitter.com/RealMissUTusa