Teen Drivers are Most at Risk

16-year-old’s have higher crash rates than drivers of any other age, and are 3 times more likely to die in a motor vehicle crash than the average of all drivers. 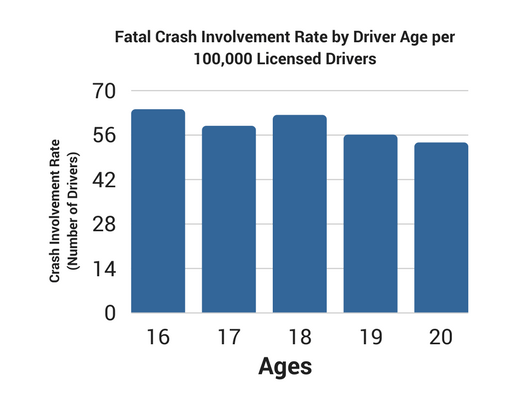 Driving with Other Teens Increases Risks

According to the National Highway Traffic Safety Administration and the National Center for Statistics and Analysis, in 2008:

Hand-held cell phone use was highest among 16- to 24-year-old’s (8% in 2008, down from 9% in 2007). 37% of male drivers ages 15-20 who were involved in fatal crashes were speeding at the time. 55%, or 2,014, of the 3,678 occupants of passenger vehicles ages 16-20 who were killed in crashes were not buckled up. 31% of drivers ages 15-20 who were killed in motor vehicle crashes had been drinking some amount of alcohol; 25% were alcohol-impaired, meaning they had a blood alcohol content of 0.08 grams per deciliters or higher.
2008 Number of Deaths vs. Injuries Requiring Emergency Room Visit.
While the total number of automotive deaths of teens is a sobering statistic, when compared to the total number of injuries requiring emergency-room attention, the true cost of teenage driving accidents is made apparent.

Fatalities are Just a Fraction of Teen Driving Injuries 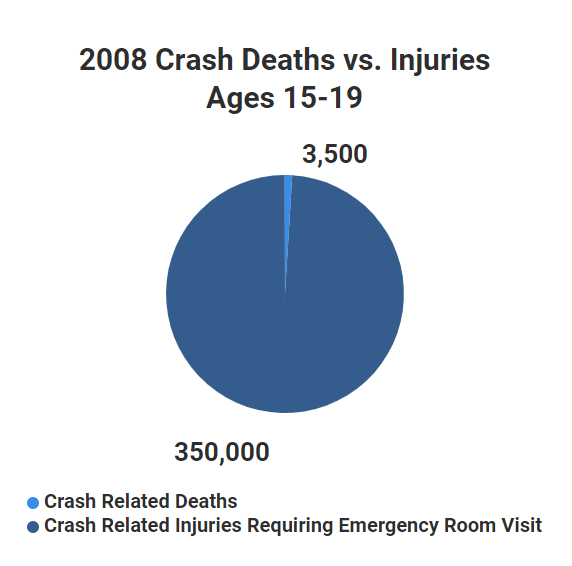 In 2006 (latest data available) crashes involving 15- to 17-year-olds cost more than $34 billion nationwide in medical treatment, property damage and other costs, according to an AAA analysis.

Teen drivers receive twice as many traffic citations as all age groups combined, increasing insurance costs for their families and other teen drivers.

The Good News: Things are Improving

Graduated Drivers’ Licensing (GDL) is becoming law in many states. GDL’s generally restricts nighttime, expressway, and unsupervised driving during initial stages, but lifts these restrictions with time and further testing of the individual, eventually concluding with the individual attaining a full drivers’ license. In states where GDL’s are required, accident fatalities for teen drivers has dropped by up to 30%.

There’s More You can do for Your Teen Driver

Many families are building upon the success of the GDL programs, and are tailoring their own Parent-Teen Driving Contract (PTDC) that meets their families specific needs and expectations. No state has the optimal GDL program.

Our Parent-Teen Driving Contract can be tailored to meet you families particular needs, and guide you in a discussion with your soon-to-be teen driver about driving safety, responsibility, your expectations, and the consequences of disobeying your rules.

By far the best time to have this conversation with your teen is before they actually get their license. Studies show a much higher teen acceptance rate when the rules and limitations of the PTDC are set early, and that the teen understands their driving privileges depend on meeting their obligations in the agreement.

Trying to implement a Parent-Teen Driving Contract after the teen has been driving for several months or years generally receives greater resistance from the teen, and can be much harder to implement successfully.

The exception is if the teen has already had an accident, received a traffic ticket, or has had driving privileges revoked for some other reason. In these cases the PTDC (along with any other remedial training mandated) can be used to help the teen begin driving again.