Due to its design, it has been deemed one of the most unstable, most dangerous vehicles on the road. It is important to understand the dynamics of the 15-passenger van and what makes ita greater risk than most vehicles for accidents. 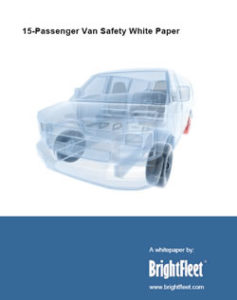 The 15-passenger van has been the subject of many studies over the years. It has beenscrutinized and closely examined for safety issues and its inability to handle certain situations and road conditions. Due to its design, it has been deemed one of the most unstable, most dangerous vehicles on the road. It is important to understand the dynamics of the 15-passenger van and what makes ita greater risk than most vehicles for accidents.

A Brief History of the 15-Passenger Van

Fifteen passenger vans were first developed in the 1970’s as an alternative to buses so that small groups of people could travel together. Rather than using buses to cart around smaller groups, many types of businesses turned to these larger vans for transporting their patrons. For businesses likeday-cares, churches, airports, nursing homes, schools, even the US Army, 15-passenger vans are convenient. However, their convenience was soon questioned when it was realized that they posed serious dangers. Over time, issues with tire performance and propensity to roll over in an accident became a big safety concern.

Accidents related to the 15-passenger van are recorded with the National Transportation Safety Board (NTSB). Records show that between 1994 and 2004, the NTSB recorded 1,512 fatalities related to the 15-passenger van. Of those, 642 of the accidents were single-vehicle crashes, 515 of the accidents involved rollovers, and 120 of the deaths occurred in 2004, alone. A National Highway Traffic and Safety Administration (NHTSA) analysis found that between 1997 and 2006, 1,090 people were killed in 15-passenger van crashes. Of those fatalities, 63 percent of deaths occurred in rollover accidents.Fifteen passenger van accidents happen more often than they should. Every year there areaccidents reported involving 15-passenger vans, many of the crashes ending with serious injuries and even fatalities.

Fifteen passenger vans are significantly longer than regular vans which allows for carrying a larger group of people without having to rely on a bus; it was soon realized that the design of these vans had a high potential of fishtailing and rolling over during an accident. The more people and cargo the van carries, the more the center of gravity shifts upwards and rearwards, causing the van to become”top and tail heavy.”When the vehicle becomes top heavy, there is a greater risk for a rollover in an accident.

Rollover crashes are very dangerous; they can throw passengers from the van, and a rollover can cause the roof of the van to cave in and get crushed, causing serious injury or death to the passengers. When a 15-passenger van is fully loaded, it handles much differently from when only a few passengers or a lighter load is on-board. Added weight in the back of the van increases the risk of fishtailing. Fishtailing in such a large vehicle causes loss of control and ultimately may cause a rollover if the driver over-corrects. For this reason extra care needs to be given when driving a 15-passenger van that is fully loaded with passengers, or at its weight limit.

Something as simple as improperly inflated tires can lead to an accident in large vans. Rear tire pressure is different than front tire pressure on most larger vans, something that can be easily overlooked by drivers who mistakenly think of these vehicles as larger version of the family minivan. Always check the manufacturers recommended tire type and tire-pressure for specific guidance.Under-inflated rear tires can overheat, leading to tire failure and a loss of control.

Due to the popular 3-3-4 (12-passenger) and 3-3-3-4 (15-passenger) seating designs for large vans which allows a small passageway along the right side of the van for loading passengers, the left rear tire is loaded more heavily than the others. If the left read tire is under-inflated, it will generate heat as it’s driven, potentially causing a tire failure and leading to a loss of control.

Proper tire load-rating and tire pressure is crucial for the safe operation of any vehicle, but can be critically important for loaded 12 and 15-passenger vans.Many owners don’t realize that the manufacturers recommended tire pressure is often different between the front and rear tires in these large vans due to their high-load carrying capacity, with some recommendations again different between a loaded and unloaded van.

Always be sure to check tire pressure during pre-trip inspections, using a reliable commercial-quality tire-pressure gauge that is known to be accurate. Refer to the vehicle manufacturers tire-pressure and load-rating specifications that are marked on the vehicle information placard on the driver’s door frame, or in the owners guide. If in doubt, call the manufacturer with your VIN number, make and model year to get current recommended settings,and be sure you tires are properly inflated. Check tire pressure before every trip.

Whether you operate a fleet of two or two thousand, understanding the design limits and maintain proper manufacturers specifications and tire pressure is important.

Equally important is properly preparing and training your drivers to safely operate large 12 and 15-passenger vans. Trained and experienced drivers who know what to do to avoid emergency situations, and will help reduce the risks and ensure each journey ends safely at it’s destination instead of as a statistic in a NTSB report.

[The full white paper can be downloaded from this link.]